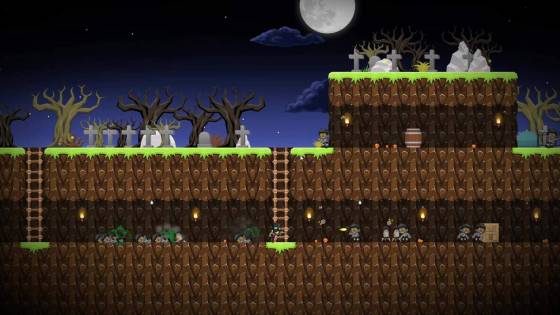 Steampunk Graveyard offers up something a bit different from the norm. It lives up to its action-platforming moniker as you have to blast away at the undead while also carefully navigating ladders and ensuring that you take them out as efficiently as possible. Each stage gives you a different set of zombies to take out and has a different look to it. The dirt, grass, and dark blue night sky look of the game definitely evokes a bit of Ghouls 'n Ghosts - but with a different take on that kind of look. The art is cleaner-looking, with fewer faults in the real-world environments. One upside to this is that everything is easier to spot, but the downside is the world feels far less lived-in.

One great thing about tough as nails action-platformers like GnG is that things like tombstones had cracks in them, while the world itself looked beaten to death. It made things gloomy and did more than just make it look ominous – but actually feel ominous and spooky too. Fortunately, by throwing wave after wave of enemies at the player, there is still a sense of foreboding – but done in a different way. The stages themselves are procedurally-generated, which is a great way to ensure that the game will never get completely old. There is always something new to see with this kind of approach because the level design will always change. It's a very fast-paced game and one that is perfect for those only able to spare a few minutes for a play session. In that regard, it is very much akin to something like the GnG games because it could fit right at home in an arcade setting.

Luckily, unlike GnG, you don't have to worry about an unfair gimmick taking your joy away. There's no beating the game twice to actually beat it. All you have to do is tackle all of the stages and win. Doing so offers up a fair challenge, but the game doesn't overwhelm players at all times. The pacing is reasonable – with waves coming at you from different directions, but not swarming you endlessly. As long as you take them out in a reasonable time, you can excel with a bit of practice.

Steampunk Graveyard was just released for Windows devices last week, and Linux users don't need to feel shut out just yet. The devs released the game in beta form on Linux via Steam - and all anyone needs to do is buy the game and select the betas tab from their library to try it out. Normally, it's hard to recommend a blind buy on a game when it's available on Windows first, but since this is only $3, it's not too much money to risk. For $3, you get an action-platformer with a fairly unique art style. While there is a pixel art influence to be sure, the end game looks highly smoothed-out and a bit like what Square-Enix does with their mobile RPG ports - only far more consistent.