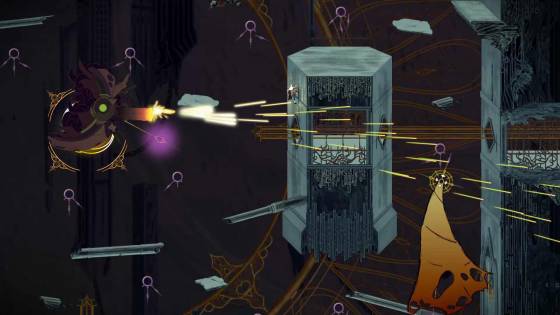 The original version of Sundered was one of the few Metroidvania-style games on the market that tried to do do something new with the sub-genre. While many focus on tried and true formulas to keep things familiar and engaging, Thunder Lotus Games added an element of dark and gothic horror to the mix to ensure that their game stood out in a very crowded field. Instead of spirte-based art, it used a hand-painted look to evoke terror in every corner of the game world. It used its rich details to add even more fear of things like boss battles.

The core game was fast-paced and had a unique premise as you could choose to either give into your ancient powers or resist them. In that sense, it's a bit like the Force in Star Wars - there's a light and a dark side to it, and the path the player takes tells your tale. You can choose to destroy enemies harshly, but in doing so, cost yourself a bit of your humanity too.  You can unlock new powers, but adding to them may corrupt you and cost you a bit of your soul in the process. There are no fully consequence-free choices to make as you need to consider upgrades carefully while also battling hordes of enemies. Sundered rewards exploration with secrets and new abilities that you can't unlock elsewhere - so just playing a pat hand may work and get you from the beginning to the end of the game, but it won't let you appreciate the music between the notes.

The game uses a mix of pre-made and procedurally-generated levels to keep things fresh, and this extends to things like enemy layouts and positions too. No two sessions will be the exact same, and the game was crafted from the ground-up to be a challenge for even Metroidvania veterans. Death is punished with a respawn, and there is a bit of a rogue-like element to things as well. You can upgrade your character and add new perks to your skillset, and tinker with them and see what suits your play style the best. The Eldritch Edition is set to be the definitive experience and brings with it all of the existing updates and the new Magnate of the Gong update too. This gives you local co-op play with up to four players able to enjoy the adventure at once. New areas are also set to be added to the main map alongside new challenges. The full rundown of everything won't be known until this version of the game launches on December 21.

Existing owners of Sundered can buy the game now and get all of this content as part of a free update - but you can also buy this version of the game on its own when it's released. There's no word on off this will be the only version offered or if another version will be released that is just the base game - but it seems like this will just be the new standard version. Beyond being playable on Linux, Windows PCs, and Mac, the Eldritch Edition will also mark the game's console debut as it hits both the Nintendo Switch and Xbox One.