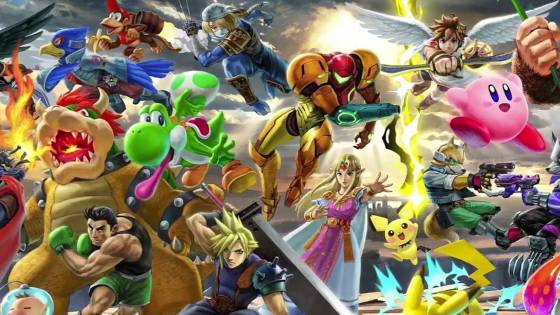 When it comes to the Super Smash Bros franchise, there is a fever that goes on in terms of one aspect of the title: the roster. For more than any other fighting game on the planet, and there are many, there is no greater anticipation and hype than the reveal of who might be the next fighter in the beloved fighting game series. For Super Smash Bros Ultimate, fans have had a different kind of expectation, as they were told that there would be fewer new characters in this roster. But now, we have a potential leak that all but shatters that perception if true.

Though not confirmed by any means (and it should be noted that a similar leak was done for Smash Bros 4 and the leak was 50% false), the source does provide an interesting look into why certain characters might be in the game. You see, a picture from a snapchat posting "revealed" an image of the final roster via the expanded banner that Nintendo has been updating with new characters. This banner shows every character in the game, and because of this, when a new character is revealed, another character is added to the banner. Some digging found that the person who posted photo works for a French print company that actually does work for Bandai Namco, who are once again helping with Super Smash Bros Ultimate.

But the question now becomes, can this leak be trusted? Well, to discuss this, we must reveal who was "leaked". According to the picture, the final characters to be revealed in Super Smash Bros are as follows: Shadow the Hedgehog (Sonic the Hedgehog), Banjo-Kazooie, Ken (Street Fighter), Isaac (Golden Sun), Mach Rider (Mach Rider series), Geno (Super Mario RPG: Legend of the Seven Stars), and the Chorus Kids (Rhythm Heaven).

This is where things get tricky. For on one hand, some of these character inclusions are very probable. For example, Ken and Shadow have been rumored for a while because of the 3rd party relationships Nintendo has with SEGA and Capcom. Not to mention that Ryu, Sonic, Zero, Mega Man, and others from the brands appear in one form or another. Banjo-Kazooie has been a fan request for a long while, as is Isaac from Golden Sun and Geno from Super Mario RPG.

However, when it comes to Mach Rider and the Chorus Kids, it's not the same level of buzz. Mach Rider was first made on the NES and had no sequel. in fact, some label Mach Rider as the inspiration for more successful franchises like F-Zero. As for the Chorus Kids, their game Rhythm Heaven (and subsequent titles), were more of a hit in Japan than anywhere else. Ironically, the Chorus Kids were a part of the Smash 4 leak, but obviously, they didn't make the cut.

So here we stand. While some of these characters are probable, others are less so. Furthermore, if we take this at its word, and assume that only Ken will be an Echo, then that would leave us with a little over 10 new characters, which would be a lot for this game that was only supposed to get "a few". Super Smash Bros Ultimate arrives on December 7th, and so the final roster will no doubt be shown soon, and the fate of this leak will be revealed as well.