Tesla vs. Lovecraft: For Science DLC Coming in December for Linux 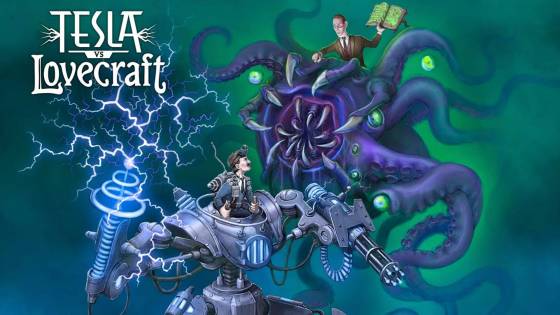 Twin-stick shooters came to prominence many years ago thanks to games like Robotron - but really fell into the abyss until Geometry Wars hit the scene. That one little freebie inside Project Gotham Racing 2 didn't just usher in a new era for them on consoles, but on all manner of computers as well. We've seen things go from geometric shapes to flashier variants of them to wholesale knock-offs. With the rise of the twin-stick shooter came imitators, but also plenty of games out to innovate as well. Games like Tower 51 did so with a unique control setup that added to the twin-stick nature of things, while Tesla vs. Lovecraft did that while also adding a scientific bend to the concept.

As Nikola Tesla, your mission was to power up your own technology after your lab is burned down by HP Lovecraft. Beyond that, you have to deal with a game full of occult monsters springing to life from his tomes and try to find all of the things he has stolen from you. It was a very fast-paced game and one that showcased a lot of character movement and speed - a big change from the usual format of staying put as much as possible to rack up big scores.

For Science! is the first set of DLC for the game and greatly expands on the core content. You now have an infinite world to use at your disposal, with an ever-increasing amount of waves to fight. This results in a tougher experience, but with that comes greater rewards as well. New perks like beating a stage with 100% health net you a special Eldritch sign and a lot of in-game currency too. New weapons are added to the fray in the form of EPIC versions of existing weapons that will not only look flashier but do far more damage. Four brand-new weapons join the lineup too, with one giant ray gun being added in alongside a series of smaller automatic weapons. Two new monsters will be added tot he lineup too - so those seeking new battles to fight will be in for a treat.

One new feature allows you to dash through solid objects, and in doing so, this can buy you some time if things get really hectic - or if you just want to phase through solid matter for the first time in a twin-stick shooter.  Perhaps the most fun new addition is the Tesla-Mech, which allows you to crush all who oppose you with great speed and deadly accuracy. It's also a must for anyone who just loves piloting mechs and causing mayhem. A total of 10 new perks are included, with a variety of benefits like more ammo, more powerful ammo, or supply drops. New power-ups make life easier, and two new inventions make your journey more fun and rewarding.

The DLC is only $5 and looks to be a great buy for owners of the main game. There's no final release date yet, but early December is being targeted as a rough release window for it. There is no word if the DLC will come to consoles as well, but it will release on Steam for Linux and PC first and most likely be followed by consoles. In the meantime, the base game Tesla vs. Lovecraft can be played on Xbox One, PS4, Switch, PC, and Linux. More info can be found on Tesla vs. Lovecraft’s website.