The 2D Action Platformer 'Valfaris' Gets a Free Demo on Steam 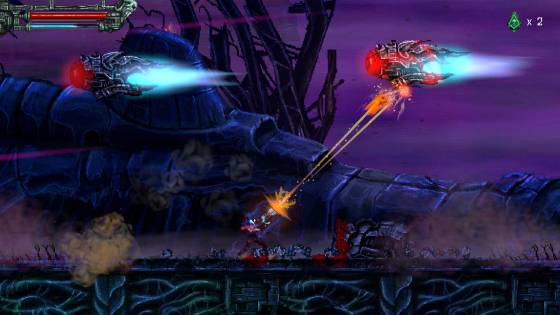 Side-scrolling action-platformers have made a huge comeback over the past decade thanks to games like Shovel Knight, but there haven't been many that tried to strike out with their own unique art style. Slain: Back From Hell was one such game, and featured a highly-detailed pixel art style with an incredibly dark visual style. It was a Castlevania-esque game with very deliberate movement and a heavy metal soundtrack that got you pumped every step of the way. It did have some rough edges though, and to their credit, the folks at Steel Mantis tried to fix it up as much as they could over time. Now, they're back with a more gun-centric game that gives you a wider array of blasters than Slain, which focused on sword-based action.

Valfaris's overall look is ripped from something like an early '90s Image comic with a giant brute of a main character who exists to destroy everyone in his path with his hulking power and flowing jet black hair. He has a wide variety of blaster types to use, including a basic multi-shot, a fire-enriched one that can do a bit more damage, or even something akin to a shotgun that does a lot of damage over a small path. You can use a plasma pistol for a faster series of attacks or focus in with a laser-infused gun that does more damage.

There's a bit of Metal Slug and Contra in this - definitely more of the latter in terms of action, but it brings a lot of the gorgeous detail work of classic Metal Slugs to the table as well. The dark look is definitely out of Slain and this is very much like a fusion of Contra-style gameplay with that game's dark and brooding art style. It's very gothic with an art style that reminds me a bit of Batman: The Animated Series in that it's so dark, the lit elements stand out so much more just due to the contrast. Colors are very extreme, with heavy tints of red, blue, yellow purple, or green depending on the stage theming. This allows each world to stand out and that helps prevent any feeling of level sameness.

As with Slain, the hand-crafted pixel art has a level of detail that goes far beyond anything that was seen when pixel art was in vogue. The Saturn was a beast for 2D games and even it never had anything that featured this kind of high level of detail. Nothing until Slain itself truly showcased pixel art that looked CG with how intricate it was. There's a ton of color depth and a lot of small details - like hair and debris flowing in the wind. The game has a demo available to play now through December 31 and it features full controller support for Windows users. Linux usage is possible via Proton, but controllers require some tinkering to work properly. Valfaris doesn't have a finalized release date, but is set for some time in 2019.