The World Ends With You: Final Remix Team Discusses Game 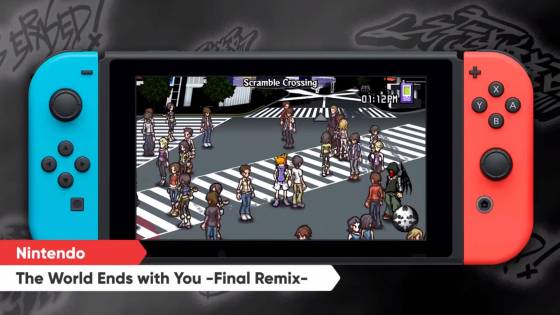 From the moment this was announced, gamers were both pleased and intrigued. Whether you played it or not on the DS, this game will be just as accessible on the Nintendo Switch, and possibly more. To prove this, the team talked with Famitsu in a recent issue and noted some key things about the game.

Director Tatsuya Kando took to talking first and noted that the game would be made perfect to fit on both the TV screen and the screen on the Nintendo Switch controller itself. On the TV, you'll actually be able to share a Joy-Con with another player in order to get true co-op going, which is actually a feature you couldn't do on the DS version. But Kando was also clear to point out that this isn't just a simple port, this is an expanded edition of the game. The World Ends With You Final Remix will feature a "new day" scenario, complete with a new boss Reaper and a new character that was teased in a previous port, Solo Remix. Though he didn't spoil anything, he did hint that you should "definitely play until the end".

Co-Director Hiroyuki Ito focused more on the gameplay aspect of the title, noting that a lot of work went into making sure that the Joy-Cons on the Switch would be suited for the unique gameplay of The World Ends With You. You see, in the game, you actually control two characters at the same time. On the DS, you did this via button controls AND touchscreen controls. The Switch will allow you to do either. But, you can't use the Switch Pro Controller, Nintendo revealed that won't be an option.

Also, Ito noted that there will be new Pins and Psyches to use in battle, so there's even more to do than in the original.

The rest of the team commented on other things The World Ends With You: Final Remix will offer, including HD graphics, extended songs (thanks to the memory capacity), new additions to the world, and more. So despite this game having come out in 2007, it's clear that the team made sure that the game would be ready for the modern audience.

The World Ends With You: Final Remix comes out on Nintendo Switch on October 12th in the United States.

Author, can you explain in further detail this :

"On the DS, you did this via button controls AND touchscreen controls. The Switch will allow you to do either."

Does that mean the gamplay is the same/similar to the ds version? Its commonly debated on Reddit whether this game will play like DS or Solo Remix. In Solo Remix, they removed controlling both characters and your partner instead acted as a pin. So we are wondering if Final Remix stays true to the original version in that regard.