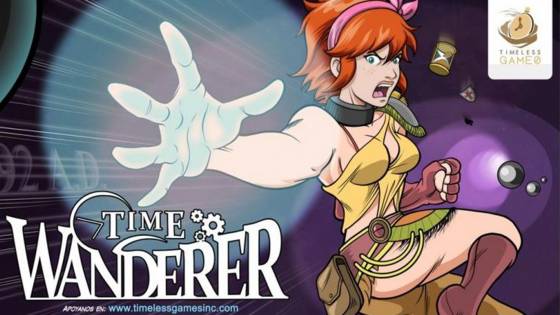 Overhead Zelda-likes are becoming a bit of an in-ting, with some aiming for a more rogue-lite approach and few mixing in traditional action RPG mechanics and puzzle-solving.  Time Wanderer mixes things up by giving its main character Corina a ton of skills to get from Point A to B. The young redhead warrior Corina goes through time portals and winds up in a wide variety of time periods. One area may have her needing to make a ghostly copy of herself to phase through solid matter, while another will have a simpler object puzzle where she must place something on a pedestal to weigh it down and unravel part of the world.

The game has been in the works for over a year and everything you do has an impact on how the story unfolds.  This is done through the chaos system, which measures how many things the player has done and how they've done it. If you destroy levels, then you will wind up with a high chaos level that will cause a time paradox and prevent you from seeing the true ending.  The goal of this system is to allow players to not only have freedom but to encourage replaying stages and the game as a whole.

Variety is the spice of life and that holds true for Time Wanderer's combat. Corina uses a very small blade as her main weapon, but can also use a long-range blaster that evokes a bit more Mega Man than Zelda. However, there's a nice twist on that as it also has the power to freeze enemies and then smash them off-screen. The goal with the combat system is to make it a bit like a puzzle itself - with all enemies having weaknesses that can be exploited. You can also defeat an enemy and expose a new path to explore a stage and find hidden areas.

This approach may seem odd in theory, but when you remember that games that are classically thought of as fighting games - like Punch-Out, are really timing-based real-time puzzle games with a different coat of paint, it makes a lot more sense. There aren't many games like this on home computing devices now and having something like this enables yet another kind of overhead Zelda game formula to be improved upon. No Zelda game since the Game Boy Color era has really focused on puzzles like this game is set to, and none have ever encouraged this much exploration to find new things.

Timeless Games is only asking for $10,000 to make this, so it does seem likely that it will be funded. For $17, you can get the game on a platform of your choice - which currently includes Steam netting you a Linux and PC version, a Switch version, a PS4 version, or an Xbox One version. Paying $20 or more gets you the game and exclusive side missions and items. Those paying $35 get all of that plus a copy of the OST, while $40 nets you the game, an artbook, and comic in digital format. The release date goal is December 2019, so the game seems to be pretty far along - although some of the clips shown on the Kickstarter page definitely showcase some rough-looking animations that will hopefully get some tuneups alongside the boost in funding.