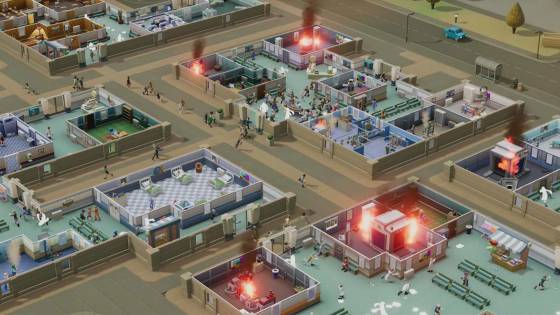 Two Point Hospital has been out for a couple of months now, and in that time, it has received a plethora of high marks. Two Point Studios announced all the details of the update that includes the sandbox mode. This mode allows you to do things like changing the starting amount of cash or the hospital's income multiplier. You can tailor every part of the environment, with things like the in-game temperature being adjusted, changing epidemics around, or turning VIP visits on or off. In order to unlock sandbox mode, all you have to do is reach a one-star rating on the first three hospitals. Doing this allows you to set up a sandbox run through on any of the game's stages right from the main menu.

The idea is that this mode allows you to play the game your way. Freeplay allows you to unlock everything, and put certain challenges against yourself if you so desire. You can also copy and paste entire rooms and improves customization options. Beyond changing names, you can adjust appearance in a wide variety of ways – including with different patterns and designs on clothing. With unlimited money at your disposal, you can do whatever you want with your staff. You can give them as much money as possible and if you want to get rid of the lines in your hospital, you can get rid of them. Being able to rename hospitals also means you can use any term you want to - so the devs fully expect a few swear-filled names for hospitals.

This update also brings with it the new Spooky Mode. This gives people pumpkin heads and adds in new creepy music. It's merely a cosmetic change for the core game, but still changes the feel of what's going on - while still managing to fit in with the existing goofy ailments. Freeplay mode is something that is commonplace for simulation games – and one that threw people for a bit of a loop when it wasn't included at launch. Fortunately, the ex-Bullfrog devs behind it opted to create one and only waited two months to release it. While this might not be ideal for those who wanted freeplay immediately, it's a solid long-term solution.

By focusing on getting the main game finished, they were able to release something that was high-quality and then fine-tune secondary features later on. In doing so, they provided a great experience at launch and then improved it for free later - and with the game not being on any massive sales since launch, early adopters didn't get burned either. This new update adds in a few new quality of life features, including a visual effect for the projector in the training room and being able to specify whether or not a room that can handle both diagnosis and treatment handles one or both of those aspects. A variety of small things like key bindings not being saved have been remedied too, and the overall experience has been fine-tuned and optimized better. Two Point Hospital is available now on Steam for Linux, Windows, and MacOS for $34.99. You can find the update's patch notes on Steam.