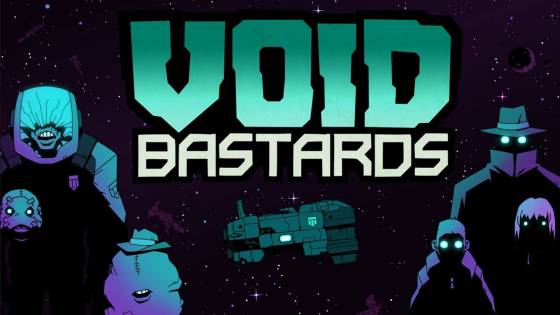 Microsoft's X018 event was a busy one this past weekend. Held in Mexico City, the event was a celebration of all things Xbox and dropped plenty of exciting news to go along with it. One of these exciting tidbits comes in the form of a brand new game reveal Void Bastards. As the title implies, this game is all about being just that. Announced in the midst of the event, Void Bastards is being brought to us by developer Blue Manchu, a studio best known for their recent PC card game: Card Hunter. Led by Irrational Games co-founder Jonathan Chey (a director for both System Shock 2 and Bioshock), Blue Manchu assures that Void Bastards is not your typical shooter. Rather, it's going by the term of 'strategy shooter'. It's all backed up by a gloriously action-packed trailer, and one brimming with content to show exactly what we can expect.

In Void Bastards, you play as random "misfit" prisoners who are hijacking spaceships to collect their loot and supplies. There's a ton of different prisoner characters to choose from, and each one has their own strengths, weaknesses, and tricks. It won't just be one of them you choose from though; rather, you'll be controlling one, and assigning orders to all of the others. Assigning them certain tasks onboard each spaceship will make or break your experience there, depending on if you gave them the right job. When you're not strategically planning out your heist, you'll be playing it from a first-person-shooter perspective. The entire game is awash in a cel-shaded, poppy comic book art style, which really gives the frenetic action within a more satisfying punch.

If your prisoner friends get killed off during a mission, you can choose from an "endless supply" of more. The loot you collect onboard the ships isn't just for show, either. Once back to base, you'll be able to utilize what you found for new upgrades, new weapons, and more, ensuring the next missions go even more smoothly (hopefully). According to Blue Manchu, the game's campaign can last you anywhere between 12 to 15 hours total, which is a decent size for a tight FPS of its kind. The main crux of the gameplay will involve weighing your options. As the trailer warns, you'll want to be careful not to get too greedy when looting the ships. Getting excessive with this might lead to unfortunate consequences, which means your prisoner will get killed off for the next one to take their place. All in all, the entire experience looks like all of the best things from both the FPS and Strategy genres combined.

So when can we get our hands on the game? Void Bastards is currently only set for a 2019 release window, but once the time comes, it will launch for both Windows PC and Xbox One. There hasn't been any word on other console versions, which means the game will be a solid pull for the Xbox One community. Best of all, Blue Manchu is planning on a same-day launch for Xbox Game Pass, so those subscribed to the service can play the game straightaway from day one. As for PC players, you'll be able to purchase and download the game either through Humble Bundle or Steam. Thankfully, it already has pages on both sites, so you should go give those a look if you want to check out the game some more. The reveal trailer down below also does a good job with that, so don't forget to watch it. With Void Bastards announced, 2019's full catalog just continues to grow, towering in the distance.