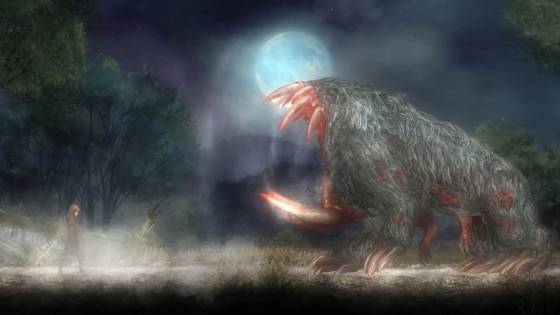 Vigil: The Longest Night is a gorgeous-looking 2D action-platformer set for release from Glass Heart Games. It uses a highly-detailed art style that greatly resembles a hand-crafted painting and is absolutely stunning. It definitely evokes a bit of classic Castlevania with its dark gothic design, with a touch of Strider as well. As Leila, your core weapon is a sword and your aim is to save your hometown from the evil forces that are taking over the nearby countryside.

The dark subject matter is definitely akin to Castlevania, while the core look is very similar to Salt and Sanctuary - but just different enough to stand on its own two feet. The world has a lot of character with a ton of detail. Things like dark nights are given life thanks to scant lights in the background that make things so much more terrifying. You have just enough light to see what's going on, and that is both good and bad. If you're in a darkened area, you can't see the horrors in front of you very well. In a well-lit area, you can see them, and it's a bit nightmare-inducing.

Beyond just evoking a sinister mood in its visuals, Vigil offers up some of the smoothest animation seen in a 2D action platformer. She can use her sword or even dual blades to attack. Leila herself hunches down, giving her a unique look as she runs in an effort to help her feel like someone who's always on the run from her enemies. With that mindset, you as a player know you can never let your guard down and have to always be vigilant.

Vigil aims to offer up a tough, but fair challenge and scales the difficulty evenly without throwing you right into the mix. Games like Death's Gambit tend to have a tougher road for players to go through, with minimal advice and help and tougher upgrades to earn. Vigil uses a deep skill tree to allow you to increase your skills and overall stats. You can also upgrade your weaponry and change things up. All that's been shown so far is going from a single sword to two swords, with a boost in speed and power allowing you to deal out more damage at a much faster rate of speed.

The environments are diverse, and go from the norm of things like forests and spooky bridges to cramped caves. The former definitely fits in with the classic Vania formula, but the latter wasn't really seen a ton in the series outside of newer games like Mirror of Fate - blending a bit of the past with the present. Giant boss battles challenge you in new ways throughout the adventure, and will require you to learn their patterns quickly or die even faster. As with any action-platformer, the soundtrack can play a huge part in it, and this one is composed by Jouni Valjakka from Whisphered - and sounds great from what's been shown so far. Vigil doesn't have a release window, but will hit Linux and Windows PCs at some point in 2019.