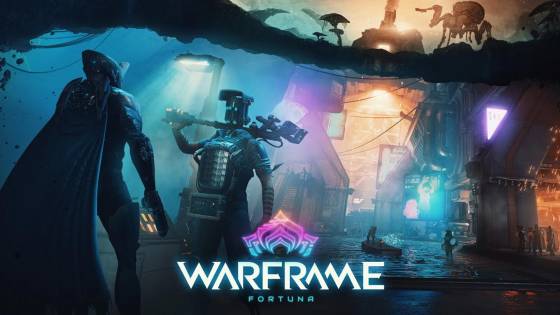 Warframe was already an enticing free-to-play option before, but its next expansion will only make the game even more alluring. For those of you who play the space-exploring-third-person shooter, you probably remember last year's big expansion update: The Plains of Eidolon. This update added a fully-fledged open world map to Warframe, full of things to do and see. There were a lot of new story bits added as a result too, and fans were universally positive about the whole thing. The next big update, Fortuna, is looking to go a similar path by adding another huge open world area for players to explore. This time around, the developers at Digital Extremes are sending us to Earth's neighbor: Venus. They've stated that this new open world map is "three to four times bigger" than the Plains, which were already fairly sizable.

Upon arriving at Venus, you'll discover a society split into two halves: the gritty underground city of Fortuna and the high-and-mighty surface area of Orb Vallis kept under control by the money-hungry Corpus Faction. Fortuna City is like a sort of hub area for the player whilst on Venus, as it's where you can go to acquire missions and available bounties. The overworld of Orb Vallis is a stark contrast in comparison, and it's where you'll be doing a lot of your more gamey exploration and fighting. Orb Vallis is a snowy terrain littered with all kinds of bizarre fauna and mechanical enemies. Your new tool for traversing this area is the K-Drive hoverboard. If you thought the Tenno characters in Warframe couldn't look any cooler, the K-Drive is here to prove that wrong. Thanks to it, you can glide around the Venetian surface to get from A to B. It can also be customized as you like.

The overarching goal for the Fortuna expansion is to "defeat the prophet of profit", which is likely referring to Nef Ano, the greedy leader of the Corpus Faction. Thanks to him, you'll find plenty of resistance in your ninja'ing activities. Considering Digital Extremes' track record with these big updates, we can likely plan on seeing other planets added to the ever-expanding game down the line. According to them, getting to Venus is a cinch once the update hits. It's the second planet on the star chart, and to get there, all you have to do is follow the instructions given to you by the Lotus. This will lead you to the star chart's Venus Junction, at which point you'll have to complete five prerequisites. Once done, the planet is yours to visit. For new players, it will take about 1-2 hours to get to this point.

Warframe fans on PC will get to enjoy the Fortuna expansion quite a bit earlier than their console counterparts; the update will drop later this week for all players on Windows PC. Those playing on PlayStation 4 and Xbox One can expect to get their hands on it "later this winter", but that's the only window Digital Extremes could provide for now. Since Warframe is coming to Nintendo Switch on November 20th, they'll likely gain access to Fortuna at a similar timing to PS4 and Xbox One users. After that point, the game will be available on all four of the above-mentioned platforms. If you're interested in getting in on the fun, Warframe is completely free to play, provided you don't mind the more grindy elements therein. The developers recently put out a trailer specifically for Fortuna, so don't forget to check that out down below. It's full of snowboarding Tenno and a fantastic backing soundtrack. For all else, hover on over to Warframe's official website.