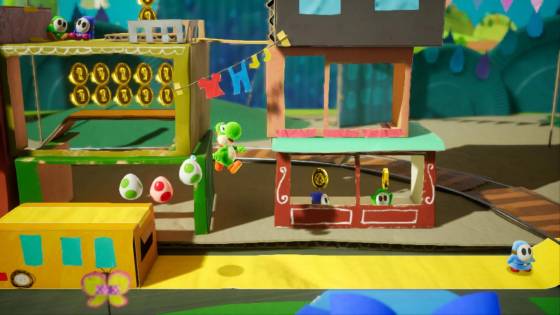 Remember Yoshi's Crafted World? Yeah, it's been a while since we've heard from Nintendo on that front, hasn't it? They had their reasons for that, of course. When asked why the adorable Yoshi game was absent from their E3 Nintendo Direct, the company explained that they were giving the game more time to be developed. Now, it looks as if the gears are winding down and the game is close to being complete. Just the other day, Nintendo announced the official release date for Yoshi's Crafted World. Not seeing fit to stop just there, they gave the 3DS some love and revealed the release date for Kirby's Extra Epic Yarn as well. Both games are coming out in the same month, which means an extra overload of yarn, knitting, and cuteness for just about everyone. It also means the 3DS isn't done chugging games out yet, which is exactly how Nintendo wants it.

Yoshi's Crafted World is the next big game in the Yoshi series, the most recent being Yoshi's Woolly World on the Wii U a few years back. Ironically enough, that game also made its way to 3DS in a similar fashion to Kirby's. With Yoshi's Crafted World, Nintendo is bringing back a lot of the staple gameplay elements we love when it comes to Yoshi (i.e. open-ended stages with hidden secrets, collectibles, and a lot of platforming challenges). One of Crafted World's most unique features is Yoshi's ability to flip the stage backwards, changing the perspective and playing through the level from the other direction on a different side. This can allow players to search for those aforementioned hidden secrets and goodies, as well as everyone's favorite Poochy-Pups that are hiding in every level. This stage flipping mechanic also adds a lot more replayability to the game than it already has. It's all presented in a wonderfully artistic hand-crafted art style, giving the game a fun aesthetic.

Kiby's Extra Epic Yarn, meanwhile, is exactly what it sounds like from the title: A re-upped version of Kirby's Epic Yarn, the peaceful little Kirby game that debuted on the Nintendo Wii back in 2010. The same version of the original got ported to the Wii U in 2016, but this 3DS version adds in new content not seen in those versions (hence the name 'Extra' Epic Yarn). The biggest highlight this time around are new Ravel Abilities that Kirby can utilize, like turning into a giant ball of yarn or using a wire sword to slice up foes. There are also new mini-games involving King Dedede and Meta Knight. Last but not least, for those who are wanting more of a challenge, Nintendo has added a new Devilish mode that ramps up the difficulty for each level. If you have compatible Kirby series amiibo figures, these can grant Kirby additional abilities for an added edge, alongside cute hats. Because it wouldn't be complete without cute hats! Kirby's Epic Yarn has a reputation for being one of the most airy, peaceful games around, and it's a good time if you want to relax.

Yoshi's Crafted World will launch on March 29th as a Nintendo Switch exclusive, bringing yet another one of Nintendo's mainline roster into the spotlight on their new console. Kirby's Extra Epic Yarn, meanwhile, will make its way to us slightly sooner. We can expect to play that on March 8th, and this version will only be available on Nintendo 3DS. If you were a fan of the Yoshi's Island games back in the day, or any Kirby games, you're probably going to have a ton of fun with these. Yoshi's Crafted World coming out is just the start of a busy year for Nintendo, as they're also projecting the new Animal Crossing game to release sometime in 2019. If you want to check out some of Yoshi's Crafted World for yourself, the trailer below presents it nicely, and leaves your heart feeling pretty fuzzy afterward. Don't say I didn't warn you!